Hi everyone! Today’s author interview is with Stephanie Chen, author of Travails of a Trailing Spouse, an adult fiction book that was released earlier this year that is loosely based on the author’s experience moving to Singapore for the sake of her husband’s job. 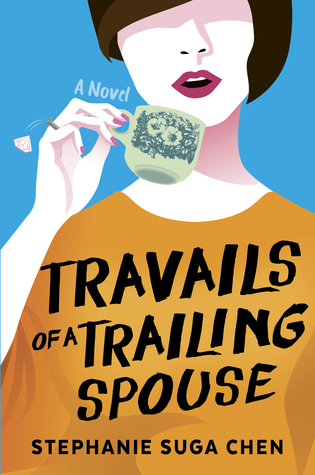 The plot synopsis from Goodreads:

The adventure starts when Sarah’s husband, Jason, is offered a position at a university in Singapore. Sarah, a successful lawyer in the US, quits her job and the couple say their farewells, and, with their two children, fly off to a new country, a new condo, and a completely new life.

The country is easy enough to adapt to (though the prices of some things? Jaw-dropping!) and Sarah and Jason soon meet the other expats in the condo. There’s Carys, the teacher, and good-looking Ian; Ashley, who keeps her apartment freezingly air-conditioned, and Chad, her amiable husband; Sara, who, like Sarah and Jason, is Asian-American, and John, who travels often for work. The couples form a close-knit group, and their evenings are soon filled with poolside barbecues, Trivia Nights, dinners, drinks and more drinks.

But is it time to put the brakes on the craziness when Jason and Chad are arrested after a pub brawl? Why, with such a fantastic lifestyle, is Sarah starting to feel listless? When will Sara’s brave front finally crack? Who’s that woman in the lift with Ian? And what secret is Carys keeping from her friends?

Not a simplistic novel of one-dimensional characters, Travails of a Trailing Spouse will strike a chord with anyone, expat or not, who has ever found life more interesting, complicated, frustrating and, ultimately, deliciously rich than could ever have been imagined.

Q: To start off, I just wanted to ask what your favorite Taiwanese food is, and what are some of your favorite dishes in Singaporean cuisine?

In Singapore, their version of turnip cake – or “carrot cake”, as they call it here – is also delicious. Called by the Hokkien pronunciation, 菜头粿 chai tow kway, it consists of stir-fried cubes of turnip cake mixed with scrambled eggs and crunchy 菜脯chai poh (preserved radish).

Q: Since, like your main character, you moved to Singapore from the U.S., it’s not hard to see that your novel is partially inspired by your personal experiences. What are some less obvious inspirations for your story?

A: While a lot of the book was drawn from my own life, some of the stories were “ripped from the headlines,” accounts that were reported in the local news that I thought were interesting enough to become part of a bigger novel.

Q: The word “expat” is often associated with white people in majority nonwhite countries. Since you’re an Asian person moving to a majority Asian country, did you ever get mistaken for a local when you first moved to Singapore? Does your book touch on this experience at all?

A: When I moved to Singapore, I thought, actually, that we would have a very local experience. We enrolled our children in local school, shopped at the local markets, etc. What I didn’t realize, however, was that because Singapore has such a large expat community, we immediately fell into the “expat crowd”. The book does touch on this when the main character attends an evening outdoor event and realizes that the entire park is filled with expats – she feels self-conscious as an Asian among the mostly Caucasian crowd, even though they are in Asia.

Q: Like Taiwan, there are lot of people of Hokkienese origin in Singapore. Did you have any déjà vu-like moments when you first moved, where things felt familiar despite being new?

A: Whenever I hear Taiwanese/Hokkien, I always turn my head towards it! There’s a familiarity about it that gives me comfort, although I usually get a strange reaction from taxi drivers or at the markets when I speak in Taiwanese to them!

Q: Did you have any particular people you used for the appearances of your characters? Alternatively, if your book became a movie like Crazy Rich Asians, who would you cast as Sarah and Jason?

Q: What is your favorite aspect of writing or being a writer?

A: For me, writing fiction is really liberating; I think I’ve always been a bit of an embellisher, and now I have an outlet for that!

Q: Lastly, have you considered writing a book about Taiwan?

Yes, for sure, it’s on the list of book ideas! My father has also written a novel, called 優美的南台灣 (Beautiful Southern Taiwan) so perhaps I could do a translation of that someday – I would really have to improve the level of my Chinese, however!

Stephanie Suga Chen is the author of the Straits Times bestselling novel, Travails of a Trailing Spouse (Straits Times Press, 2018).  She is a graduate of the Wharton School of the University of Pennsylvania and a former partner of a New York City-based private investment fund. A proud Taiwanese-American, Stephanie grew up in Michigan and moved to Singapore in 2012 with her husband, two children and elderly cocker spaniel.