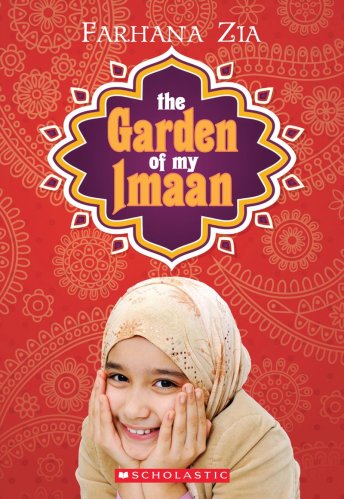 My Summary: Aliya has a lot of problems typical for a fifth grader: she wants to fit in, she worries about being popular enough for student council, and she has a crush on a cute boy who will probably never notice her, and she’s loaded with homework assignments that she’s not too excited about completing. Unfortunately, on top of that, she faces Islamophobia from people around her, even though she’s not even very strict about observing certain Islamic traditions. Then, a new girl, Marwa, arrives. She’s Moroccan and wears the hijab, which makes her a prime target for bullying. Aliya can choose to avoid association with her, or maybe Marwa has something to teach her about being true to oneself.

Even within diversity, there is diversity. Although the majority of Indians are Hindu, there are many who are Muslims. I think this is the first book about an Indian Muslim American that I’ve read, and I’m glad I found it because it covers a lot of issues in an way that’s accessible to kids.

Aliya’s family is Indian and Muslim. They speak Urdu at home, and she knows a bit of Arabic for the common prayers and greetings. However, the women in her family don’t wear the hijab, eating halal food isn’t a huge priority for the family, and Aliya hasn’t observed the fast for Ramadan with much success. Throughout the course of the book, she starts to see her faith in a new light and make commitments to observing certain practices.

Aliya is a flawed but still sympathetic protagonist. She wants to do the right thing but feels inhibited by fear and social pressure and doesn’t always know how to respond to difficult situations. Thankfully, she is not alone in her struggles; she has Muslim friends from Sunday School at the local Islamic Center to commiserate over hate incidents and regular tween issues, and her parents, grandmother, and great-grandmother are there to support her as well, offering their wisdom and advice to guide her toward growth.

Unfortunately, due to a bunch of teasing and bullying from kids as school, directed toward Marwa or toward Aliya, she internalizes some of the negative and xenophobic perceptions about people like herself.

It takes two different school projects and then some for Aliya to come to terms with her faith. One is for her Sunday School and takes the form of a series of letters she writes to Allah with the intent of bettering herself. The other is a project for regular school where she works with her best friend Winnie on a display board to showcase their respective cultures and religions.

This book is a celebration of diversity in two ways. One is Aliya’s best friend Winnie, who is biracial Jewish Korean American. Like Aliya, she faces microaggressions from people, even from Aliya’s own grandmother (Aliya tries to correct her), so even though she’s not the main protagonist, her experiences are represented on the page.

The other way is in its portrayal of the differences in how various families and individuals interpret and practice Islam. Marwa wears the hijab with confidence, Aliya’s mother does not and believes it is not necessary to cover up to be modest. One or two of Aliya’s friends from Sunday School wear the hijab, with varying degrees of confidence because of the Islamophobic attacks that happen so frequently to girls who wear it. More importantly, they’re shown as having agency in doing so; it’s a personal choice that they make for themselves.

Aliya’s personal and religious/spiritual journey were a pleasure to follow along with. The book alternates between a typical first-person narration and an epistolary format for Aliya’s letters to Allah. Those letters bring the reader into the intimate relationship she has with Allah, and the change she undergoes is apparent from the progression from mere complaints about what is happening to conscientious self-reflection and constructive action. She may not know all the answers at the end, but she has greater confidence, self-discipline, and wisdom to navigate her future.

The major themes in this book were interesting to me because they approach adversity and Islamophobia/prejudice from a gentler angle than, say, Does My Head Look Big in This?, which has a very different tone, overall. However, the “quieter” methods of dealing with bigotry are not necessarily less powerful or effective.

My one criticism was an instance of ableist language. Aliya nicknames her finnicky and crotchety great-aunt Choti Dahdi “OCD,” which stands for “Old Choti Dahdi.” Her great-aunt isn’t a two-dimensional character defined purely by her neuroticism, but the nickname was an insensitive one.